On our second day in Naples we decided to take the Naples Underground tour (Napoli Sotterranea). 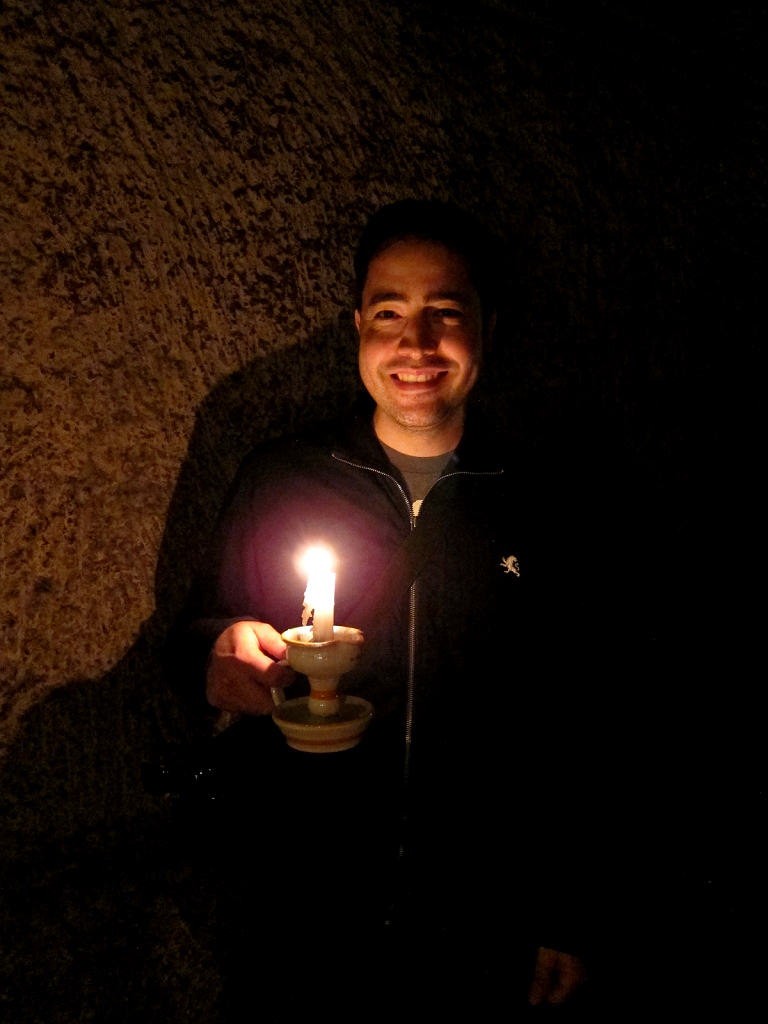 I love this face 🙂

The Napoli Sotterranea entrance was right in the center of the old Spaccanopoli neighborhood, to the left of the amazing Basilica di San Paolo Maggiori, and a block away from the even more amazing Pizzeria Di Matteo, where Aldo and I got lunch for 3€. That’s 3€ for the two of us, or 1.50€ each. OK, it didn’t include a drink (we had a bottle of water with us) and we sat on a bench outside to eat this lunch, but we definitely filled up on freshly made margherita pizza, fried pizza stuffed with ricotta, rice balls stuffed with meat and cheese, and fried mac and cheese patties. But I am getting distracted, if you want to know more about the magical 3€ lunch, you can read my post about eating on a budget in Naples (coming soon!).

We happily ate our lunch and went to the Naples Underground tour. 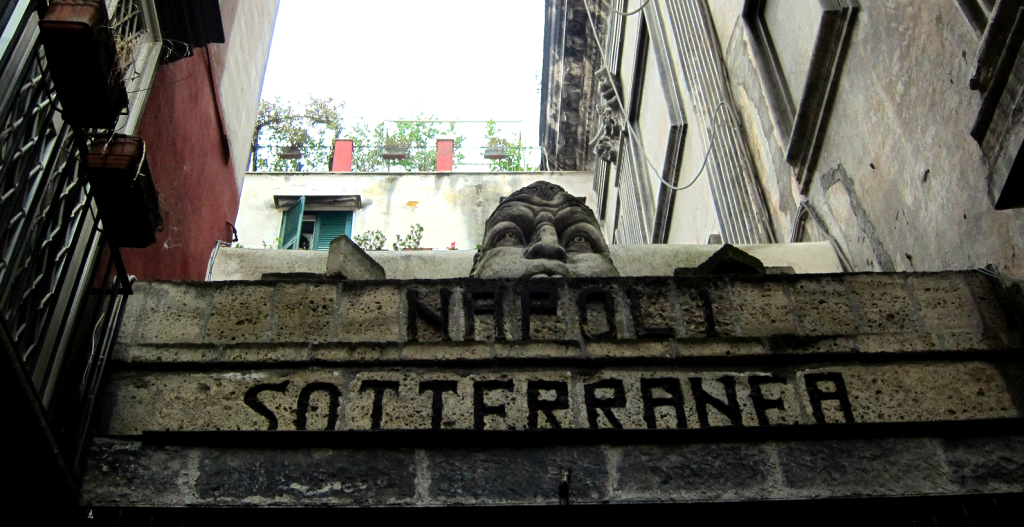 The history of Naples is pretty amazing. There used to be a law in ancient Rome that prevented the expansion of the city beyond its borders. All new construction had to happen on top of old construction, and there are layers and layers of history in Naples.

Naples was built on top of ancient Greek aqueducts, and that’s where the tour took us.

We got to see the wells that have supplied Naples with water for thousands of years. We learned that the richer people had wells dug to connect their houses directly to the water, while the average Joes (or should I say the average Giuseppes) had to go to a communal well in the city to get their water.

There are steps carved out in the wells, and little well cleaning people would get hired to clean the wells. 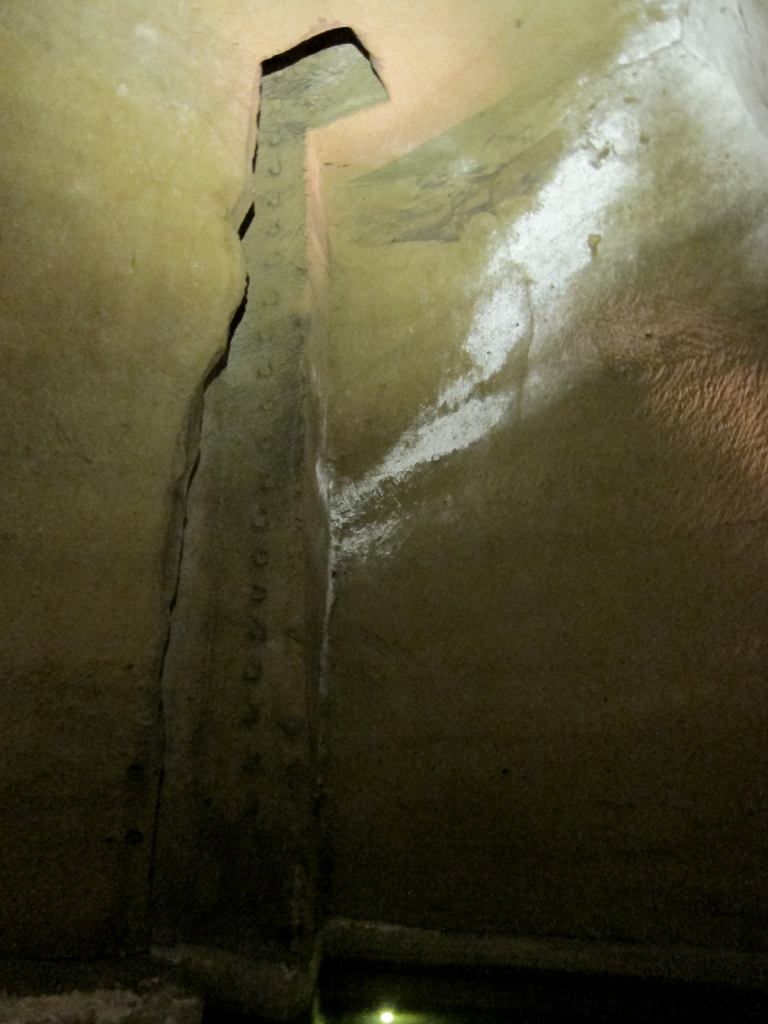 We got to walk through very narrow passageways using only candles for light. There was one part of the tour where one lady decided to stay back because the space we had to walk through was really narrow and dark – not for the claustrophobic! 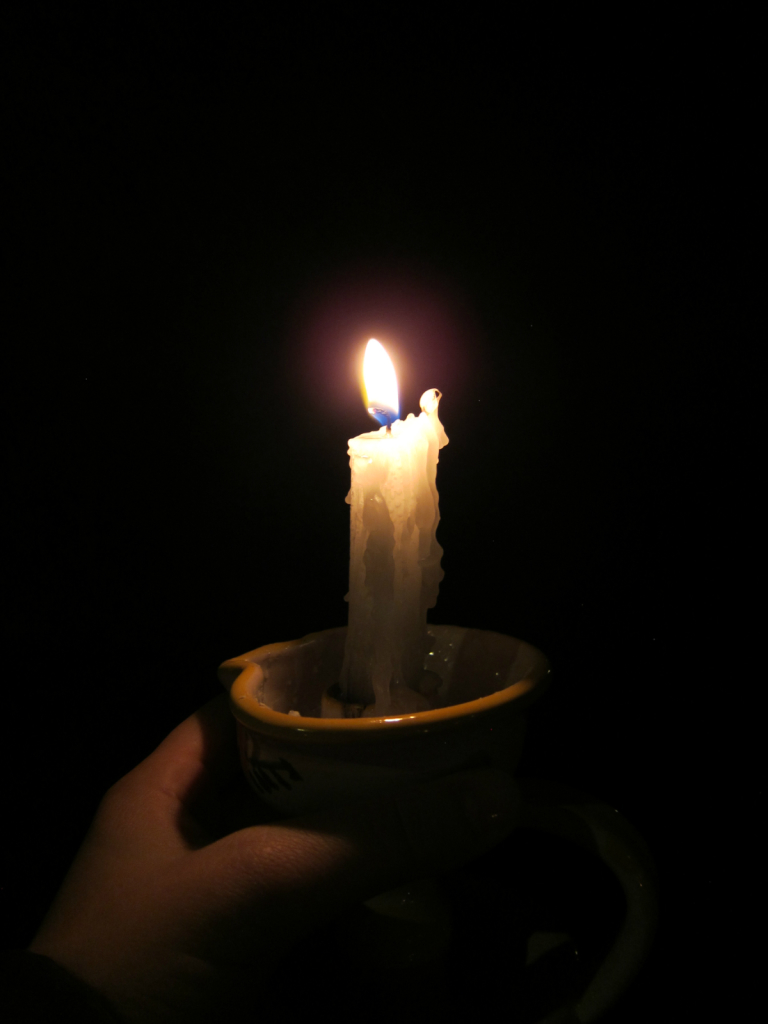 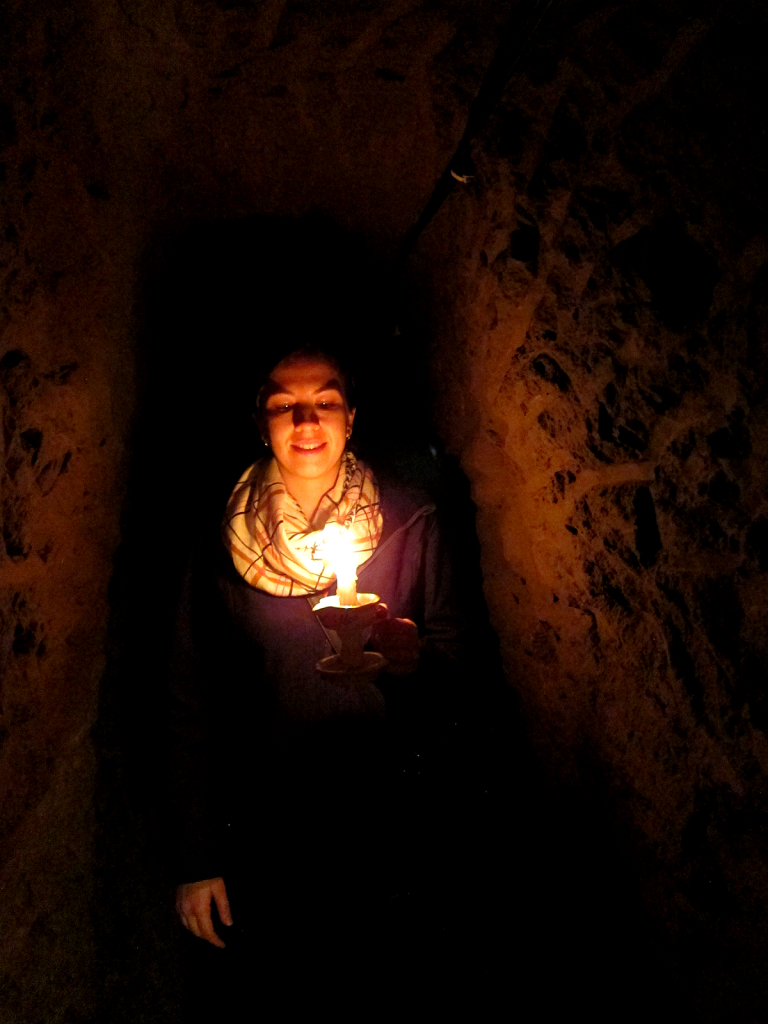 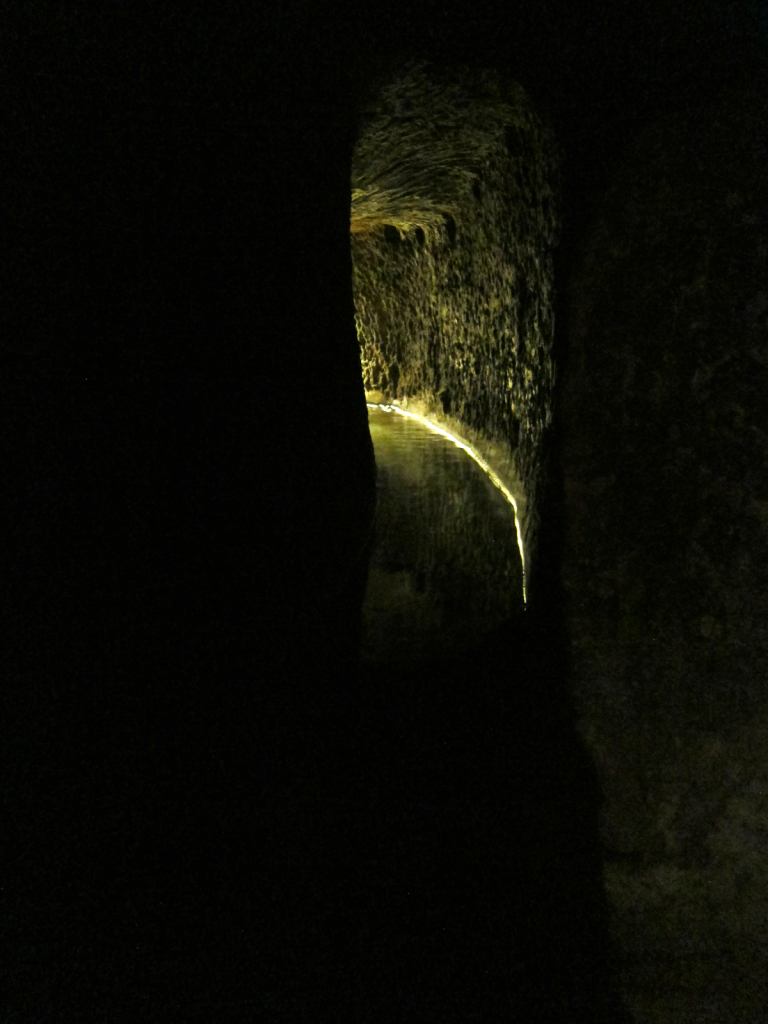 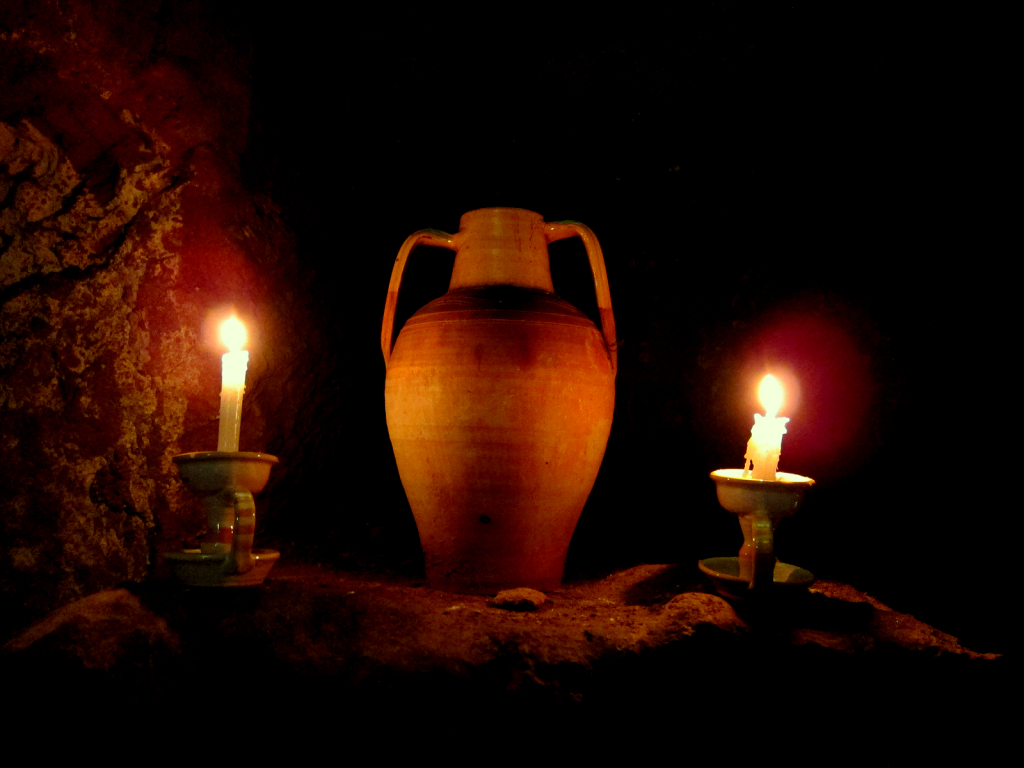 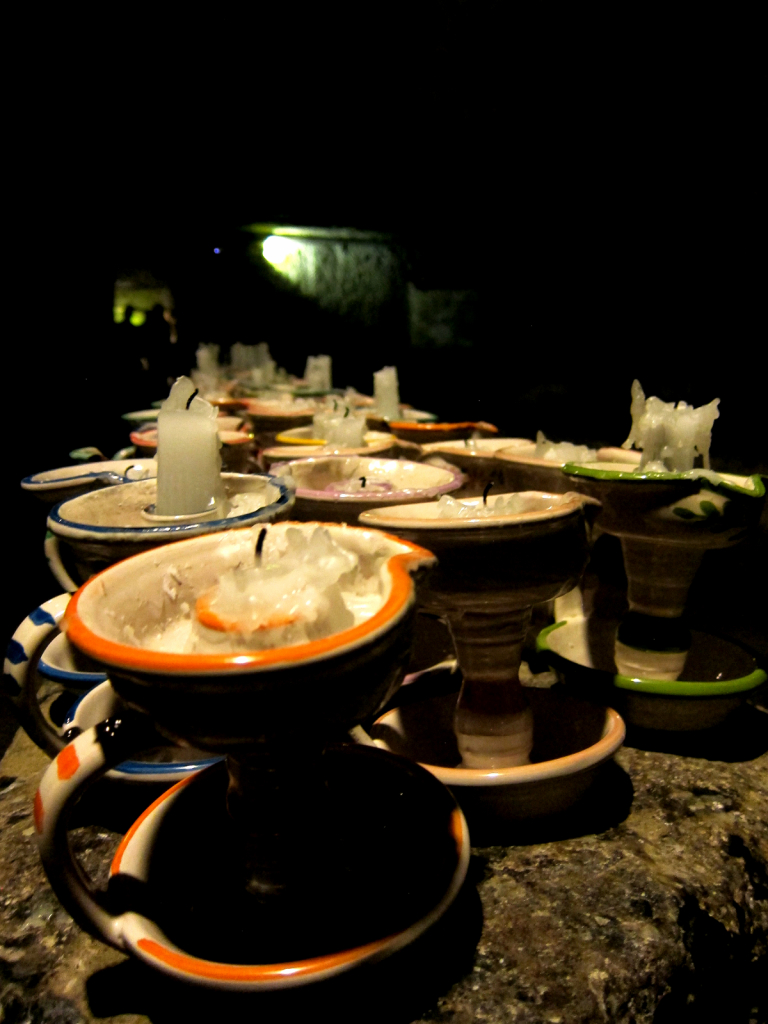 The underground area was used as a shelter during WWII, and thousands of people would hide down there during air raids. Some used to wait outside the entrance to the underground on their beds, and then would go inside when the siren would sound. Here is a picture of the street from that time: 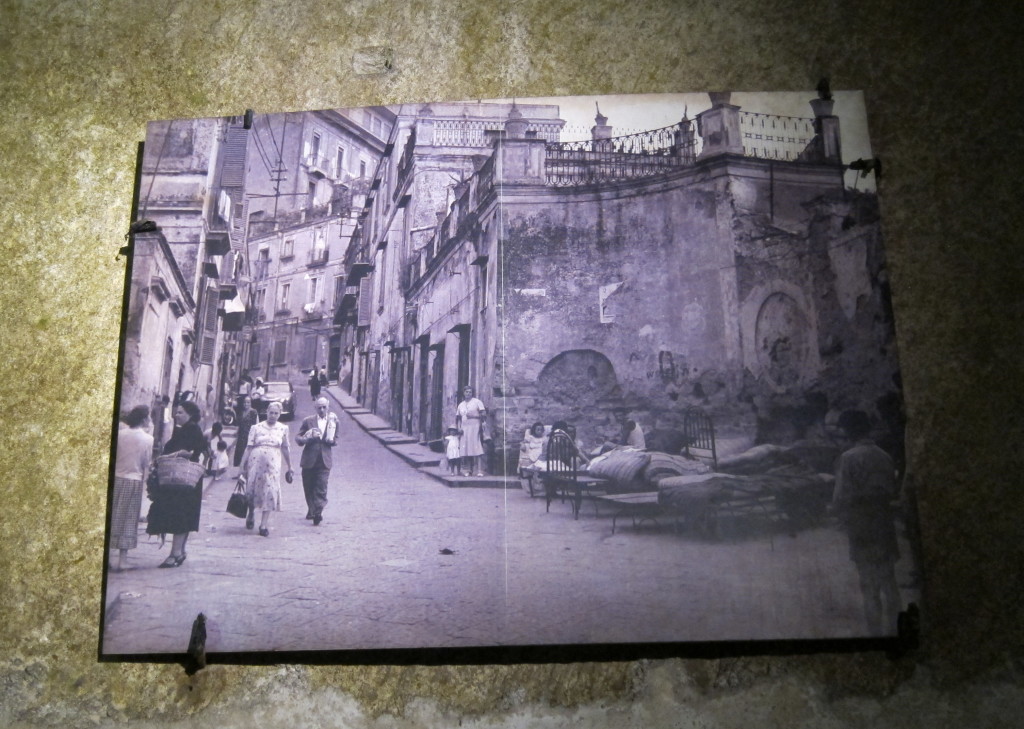 There were also a few shells that were dropped into the underground during the war but never exploded: 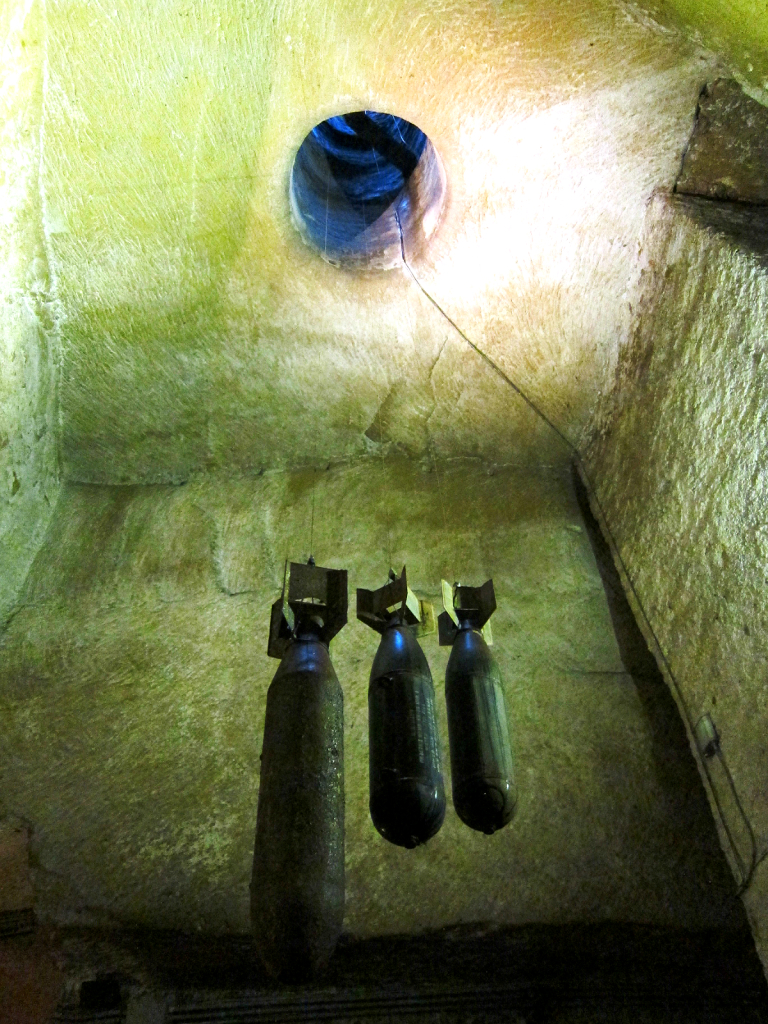 As part of the tour, the tour guide took us outside and led us to an apartment building under which there used to be an ancient theater. The legend goes that Nero was performing in that theater when an earthquake started. He was so self absorbed that he demanded that no one leave the theater until he was done.

The amazing thing is that this ancient theater was just sitting there for centuries under a modern apartment that people were living in. The apartment had a trap door under a sliding bed (how cool, right??), and under the trap door was a dingy one room basement. At some point someone discovered that behind the plaster in the basement was a brick wall from ancient times. So more digging was done, and they discovered that there used to be a whole theater there! The theater-basement became part of the museum. 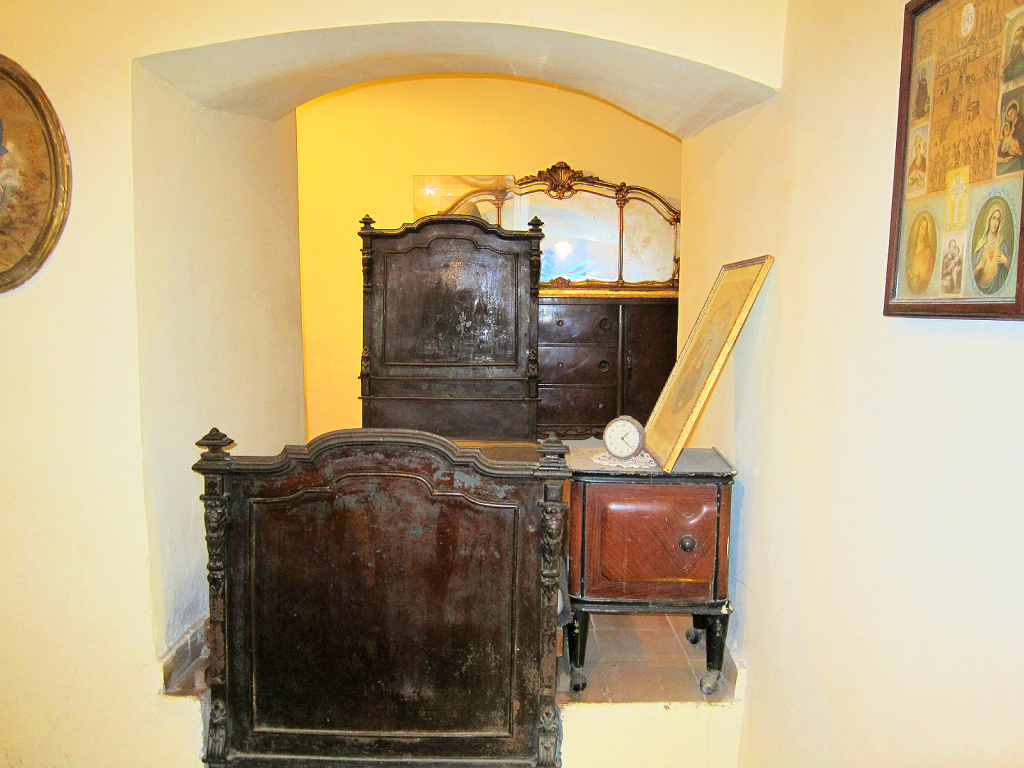 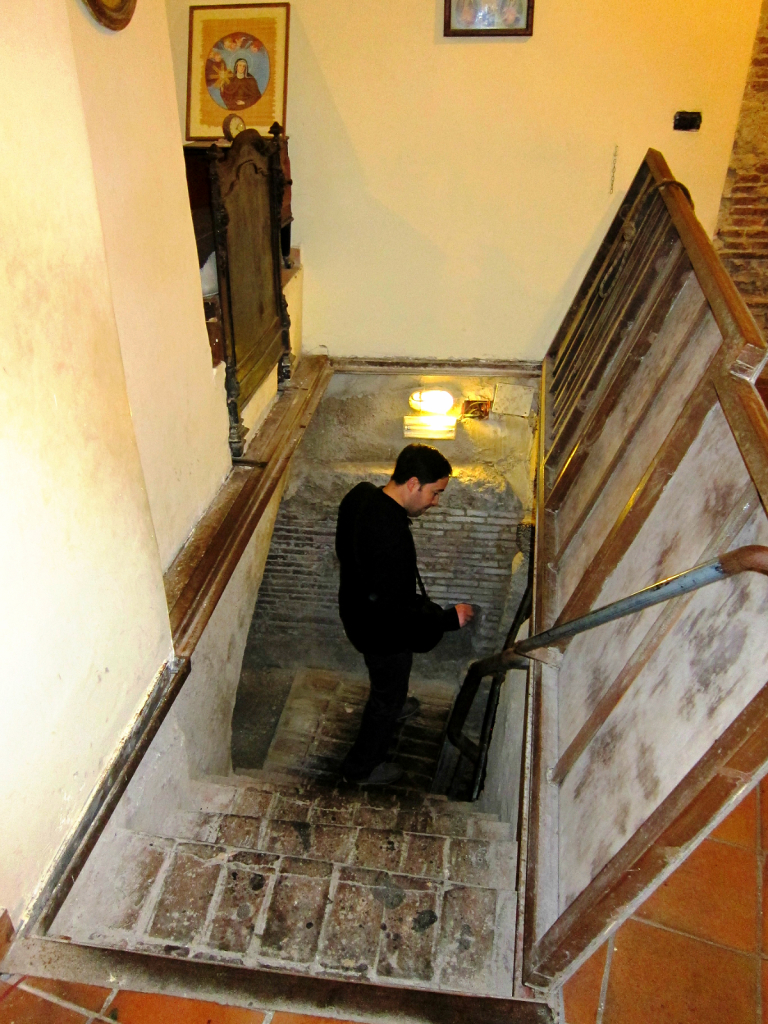 The crazy thing was that when we went down to the basement and were standing in the backstage area of the theater and looking up, there was a window covered in bricks. Behind the window there is a bedroom of a modern apartment. People are living on top of history! 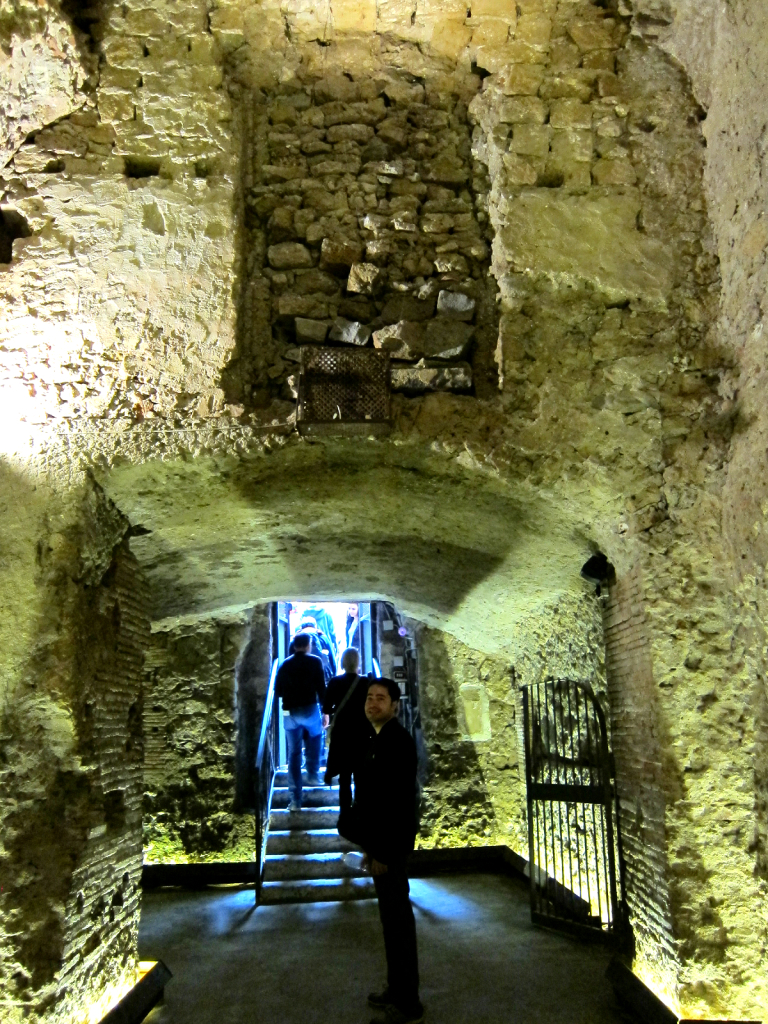 Here is a picture to show all the layers of walls that were built in that city. The criss-cross wall is supposedly the best construction to hold up to earthquakes, which are common in the area. Apparently it works, because it’s still standing from centuries ago. 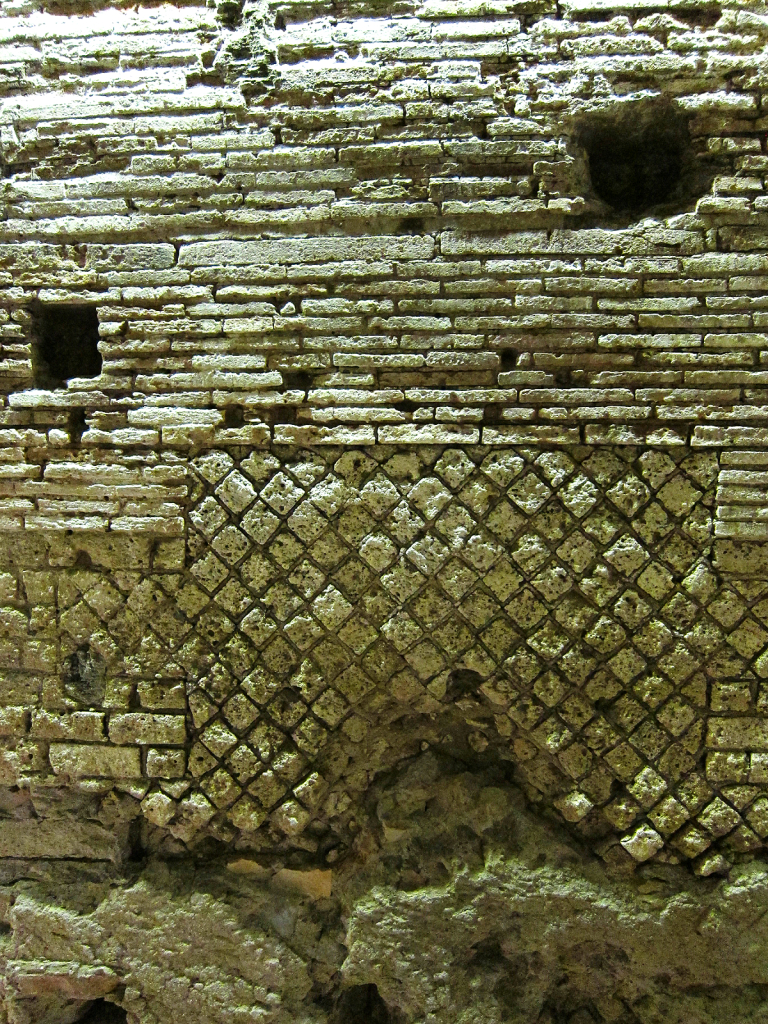 There were also remains of old wine barrels from wine that was made by nuns and monks who would supposedly sneak off to hang out together in the dark underground passageways. Some people believed that the wine was magical because nuns would somehow get pregnant after drinking it. Obviously, that’s just what happens when men and women get drunk in the dark together. 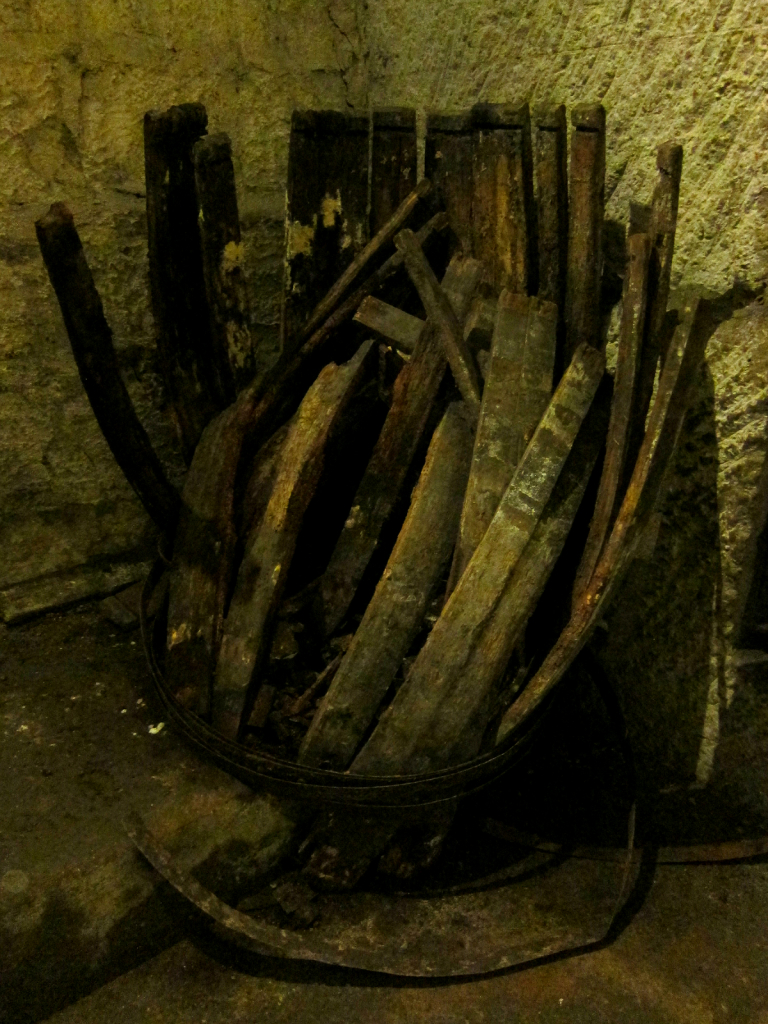 This tour was one of the highlights of the trip. We were amazed at all the history packed into this tightly packed, hectic, awesome city. The funny thing is that I was so excited about this tour that I read pretty much all about it before going, and knew most of the things that we learned during the tour. But it was still so surreal to see it all  – I am not sure I believed it until I saw it! So now you know all about the tour too, but I would still recommend going if you are Naples. 🙂

Oh, and we saw a super friendly dog outside of the entrance to the tour. He probably just wanted some of that fried pizza. 🙂 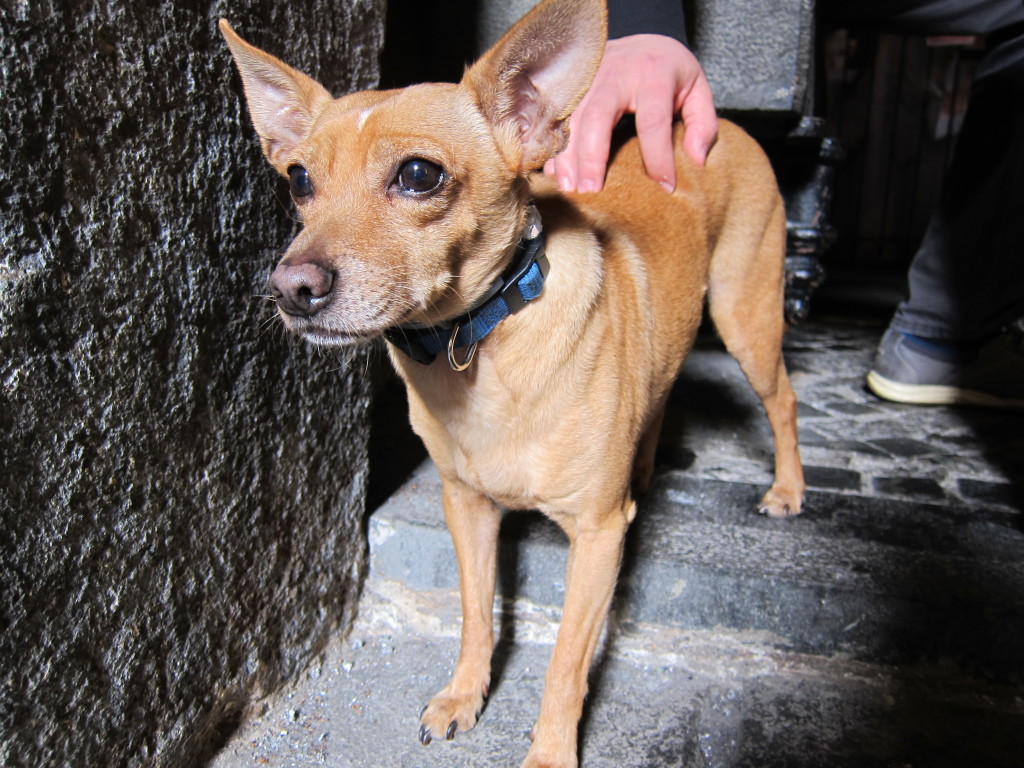