Naples was by far the cheapest city that we visited in Europe as far as eating on the go. We weren’t really trying to eat on a budget, but we discovered a couple of awesome places that just ended up being really good and really cheap. 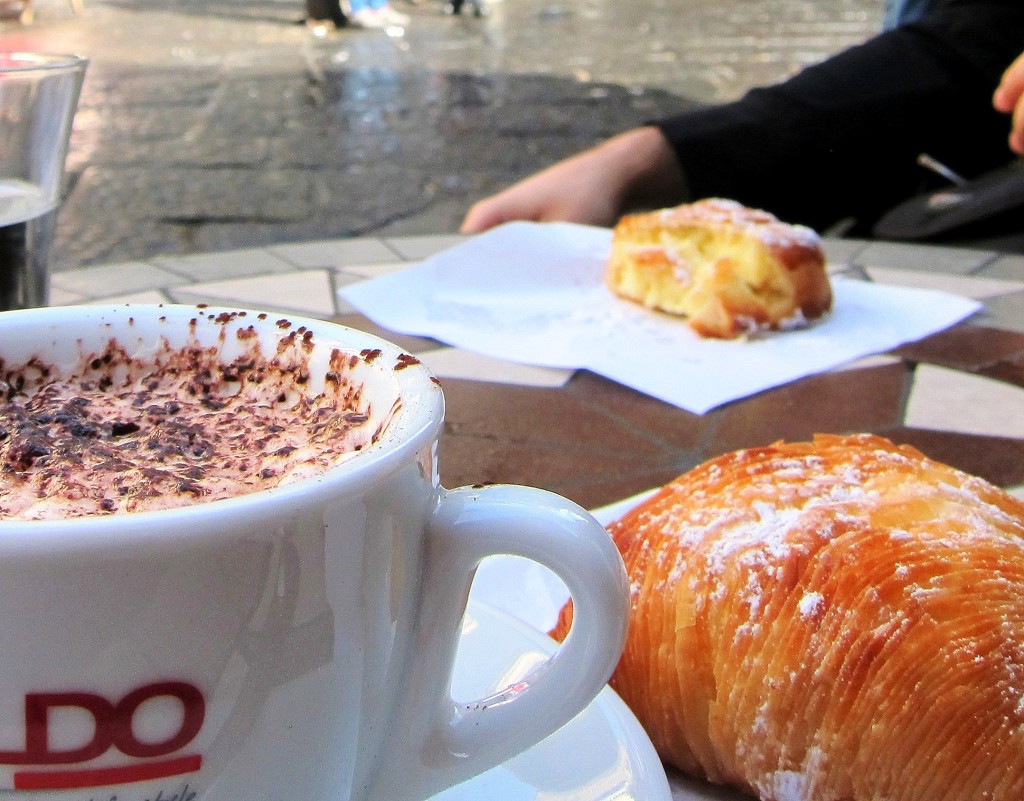 Our favorite spot in Naples was the Pizzeria Di Matteo in Spaconapoli. We would have totally missed this pizzeria if it wasn’t for the huge crowd outside. We got curious and peeked in to see what the people were waiting for (as I cautiously held on to my purse)… and we saw that there was a sit-down pizzeria, but also a counter selling food to go right by the entrance. And then we realized by there was such a huge crowd – 1€ Margherita Pizza! There was also fried pizza stuffed with ricotta, rice balls stuffed with meat and cheese, mashed potato croquettes, and fried mac and cheese patties stuffed with meat. Everything was super fresh because we saw them replenish the food in the counter with steaming hot freshly made stuff. 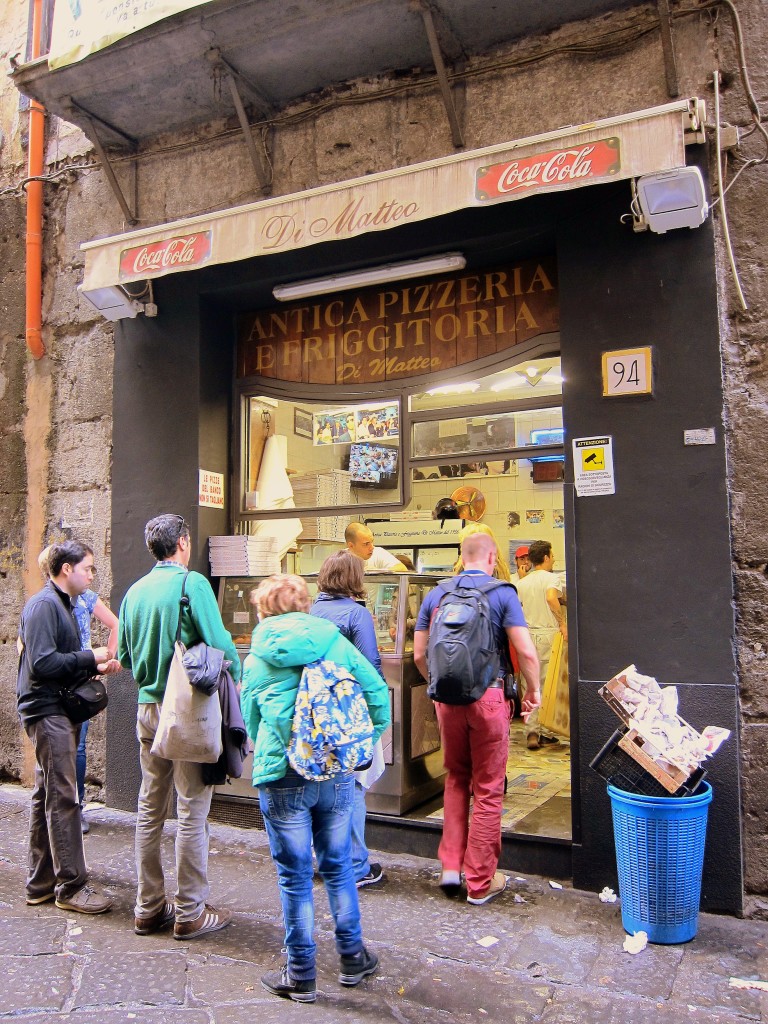 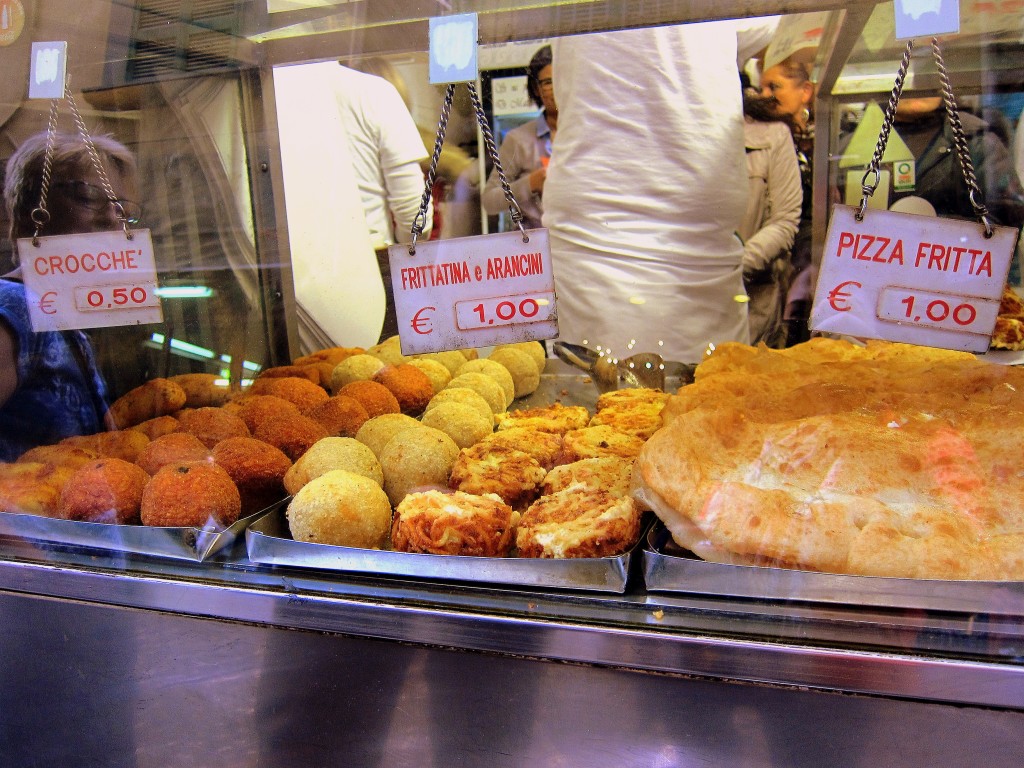 We got a margherita pizza, a fried pizza, a rice ball, and a potato croquette. We had water with us, so that made the meal even cheaper. 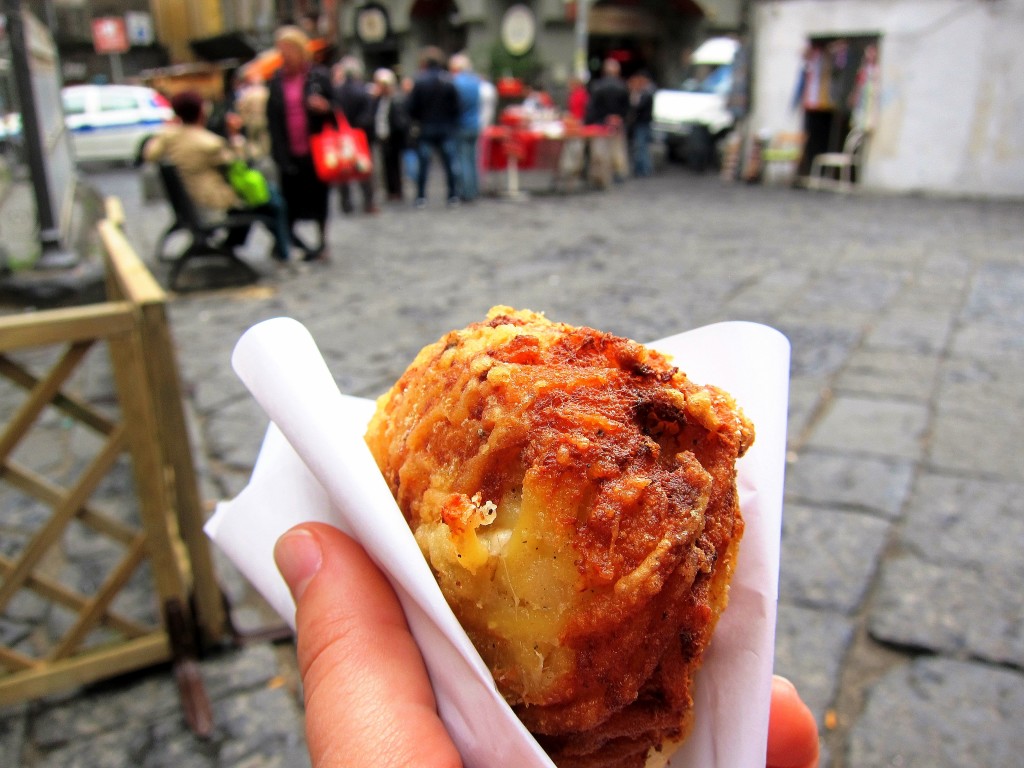 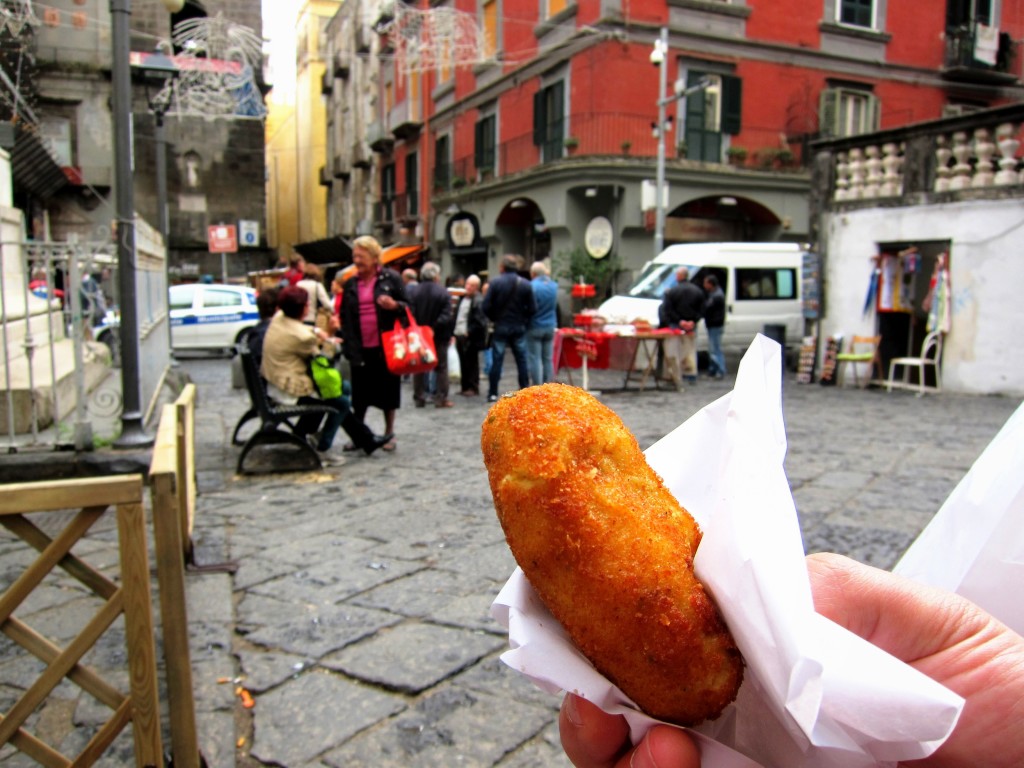 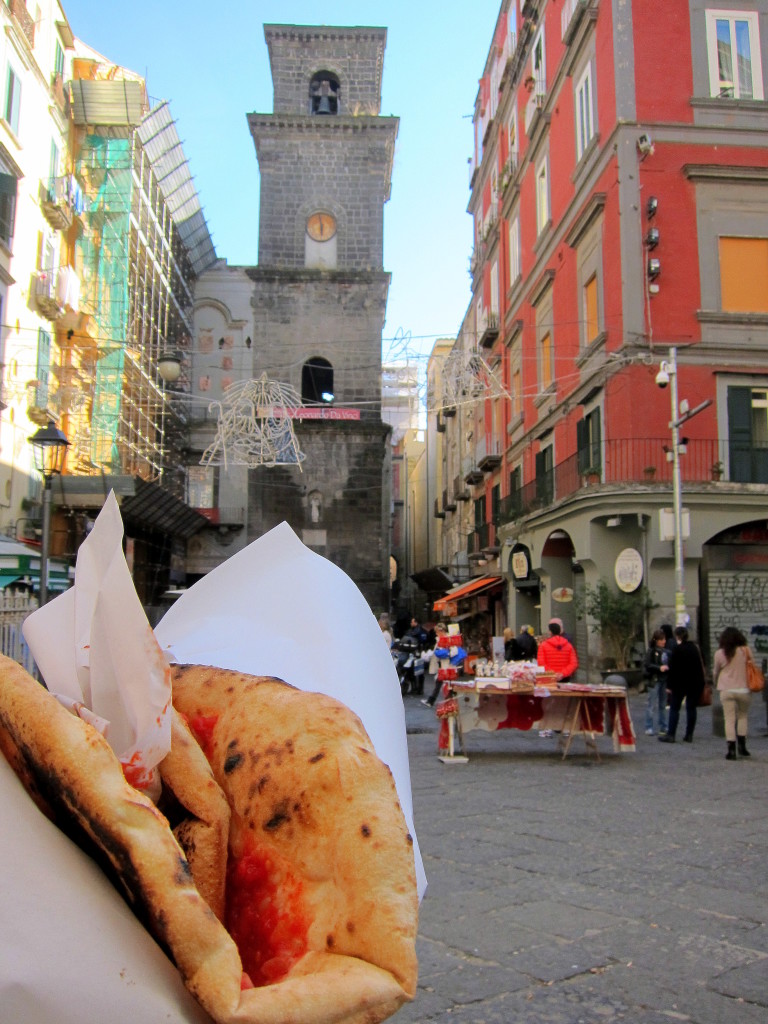 We sat down on a bench in the nearby Piazza San Gaetano and enjoyed our lunch. We were definitely full, all for 3€. The fried pizza didn’t have that much ricotta in it, but it was still really good for 1€. The margherita pizza, just like ALL the pizza we had in Naples had that amazing soft chewy crust. Yum.

We actually came back here the next day and got more rice balls and the mac and cheese patties.

I bet the pizza inside was really good too. The menu looked like they had some great topping combinations and I am pretty sure none of the pizzas on the menu were more than ~6-7€. So if you’re on a budget, go there.

One night we went to Pizzeria da Gaetano. Our server was so so nice, I don’t think I’ve ever had anyone serve me food who actually genuinely cared about whether we were enjoying our food. We had more pizza (~6-8€) and a bottle of wine (5€). The pizzas were large enough that we took some to go and had it for breakfast the next day. 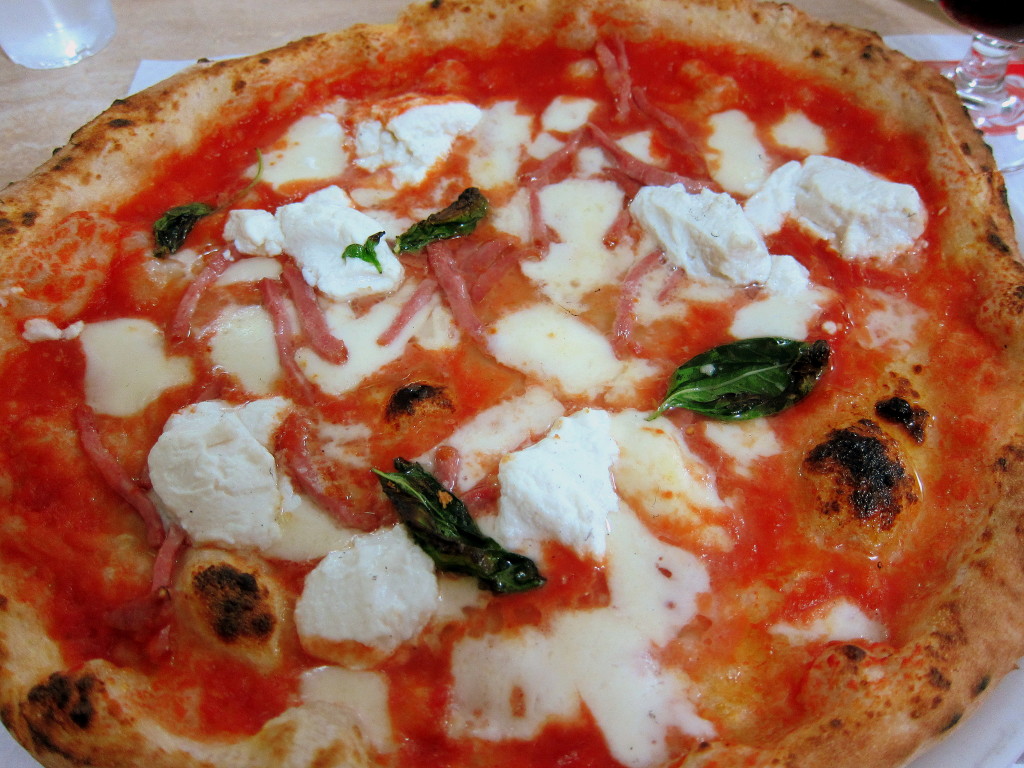 Throughout Naples it was easy to find cappuccinos for 1€, so I won’t even mention any specific places. You just have to remember that the prices for drinking standing up at the counter are lower than if you want to sit down at a table. But sometimes the price is worth it if you get to rest your tired feet. 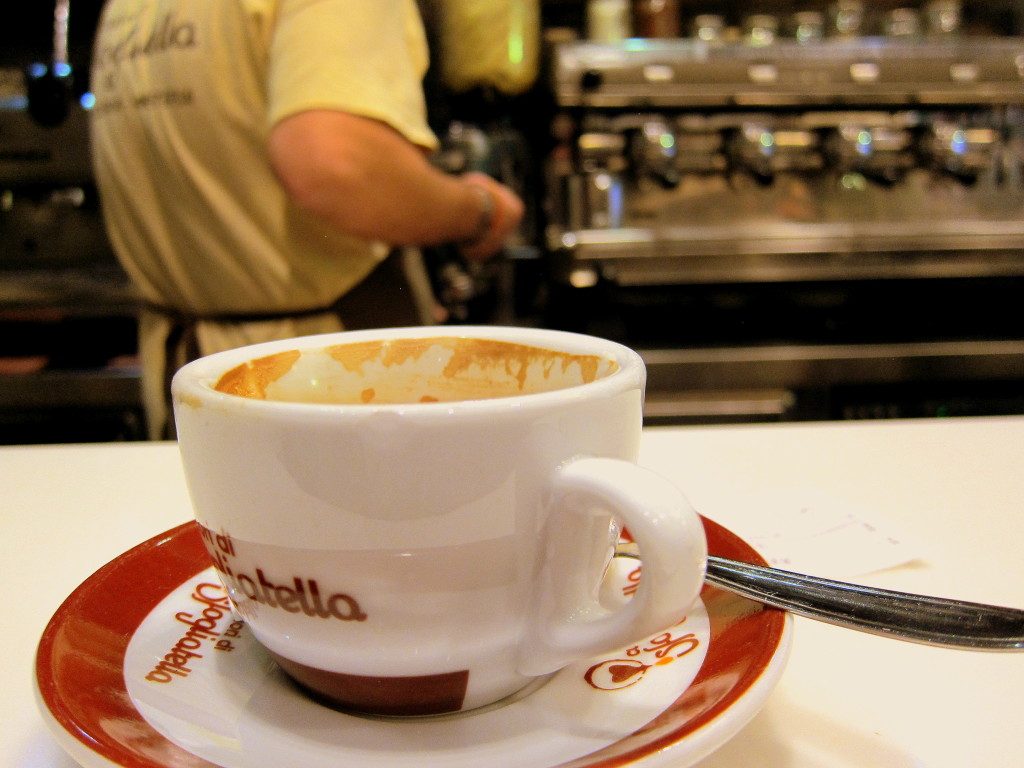 One of the reasons we went to Naples was because we wanted to go to Pompeii. We knew that the area around the Pompeii ruins would have overpriced tourist food, so we got some sandwiches to go for lunch before heading to Pompeii. All over Naples are little bakeries, and you can find delicious frittata sandwiches (yes, frittata in a sandwich, isn’t that a great idea?). It sounds like it would be a bit dry, but it was actually pretty good. And again, those fried mac and cheese patties. Those were my favorite. The problem with not speaking Italian? Sometimes they contain meat, sometimes they don’t – we never asked. We didn’t care either way, but I can see that being an issue if you’re a vegetarian. “Meat” in Italian is carne, just in case you’re wondering.

And last but not least –  the sfogliatella. Sfogliatella literally means small thin leaf/layer, and this awesome little pastry is so delicious with its flaky layers. They are traditionally filled with a sweet orange-flavored ricotta filling, and they are so so good. Get them while they are warm (the cold ones don’t compare) – either first thing in the morning, or from one of those warming glass enclosures, not cold from the counter. So good!! 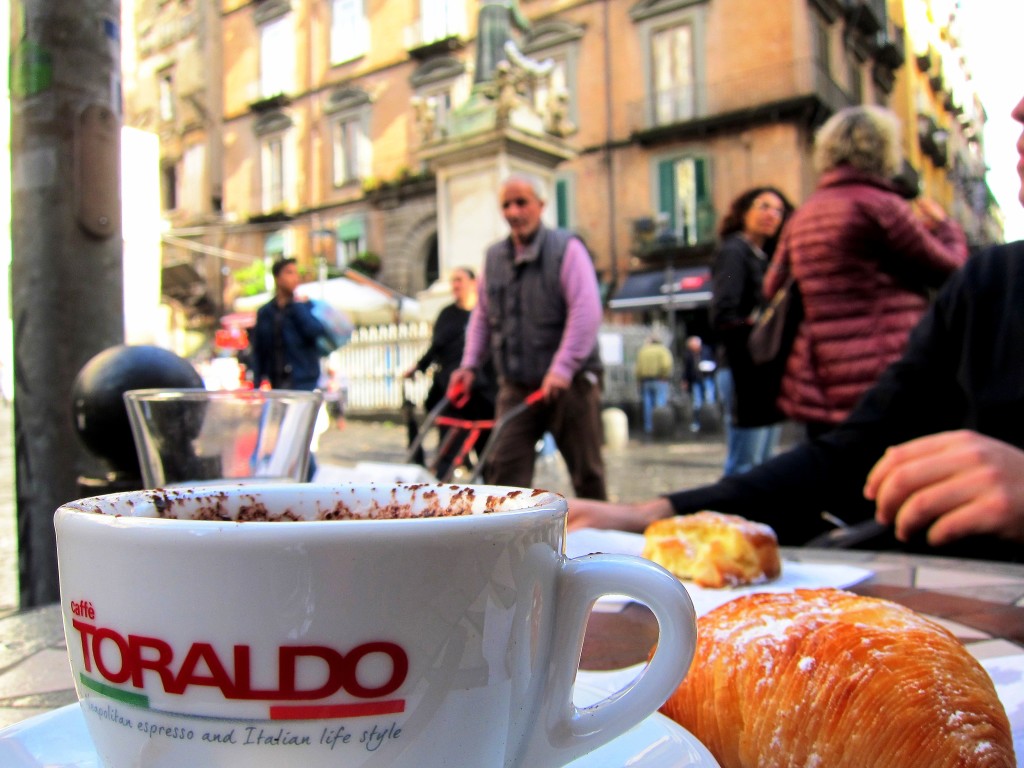 5 thoughts on “Eating Cheap in Naples”