One of the most fun things we did in the Dominican Republic was the 27 Charcos tour. We drove over there from Santiago in the morning, and that was a good decision on our part because when we were done with our adventure, there were SO many people there in the early afternoon.

On our way there we ended up picking a tourist couple from Germany who took a bus to the Charcos and were dropped off about a mile from the entrance to the 27 Charcos. When we got there we paid for our tickets, put on sunscreen, grabbed our waterproof camera and went to meet our guides. The whole group was just the 4 of us – me, Aldo, and the 2 tourists. I liked that we weren’t asked to join the loud group of teenagers that were behind us. 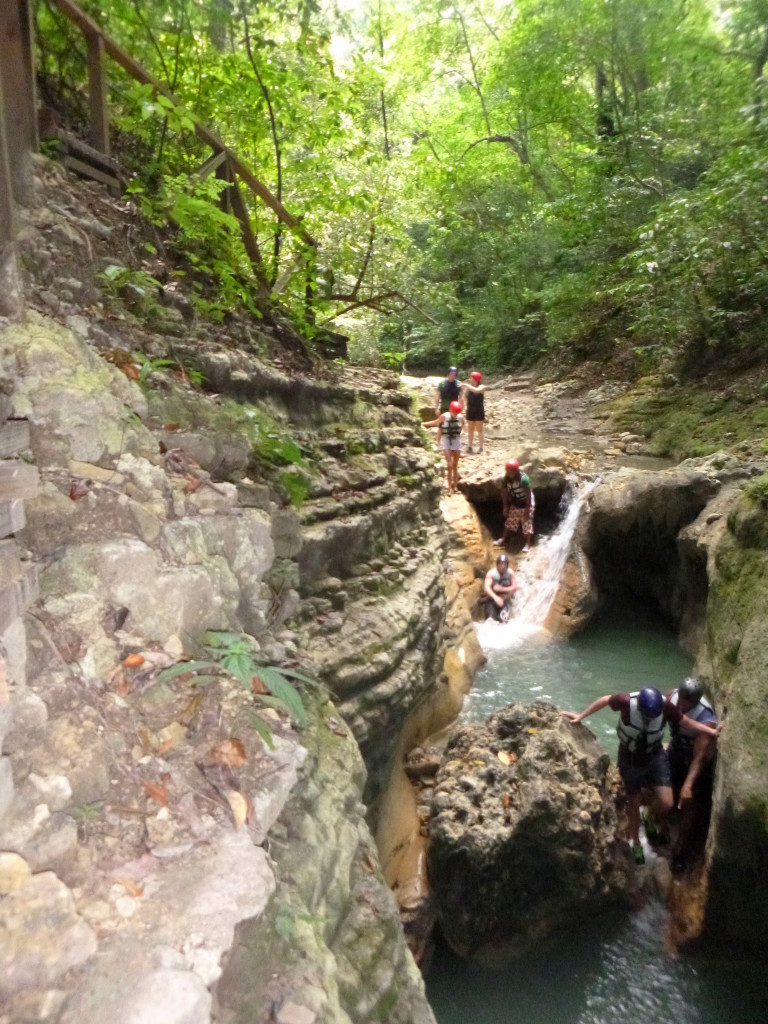 The tour started with a 45 minute hike uphill, and that was a bit tough in the heat. I am glad we started out in the morning before it got unbearable! We reached a river towards the end of our hike and ended up walking along the riverbed for a few minutes. And then all of a sudden we reached the first swimming hole! The first guide jumped in, and the second guide just points at the hole and says “jump!”

Geez, I haven’t jumped into anything in a very long time! It wasn’t a long jump, only several feet, but it was fun! And the water was perfect – refreshing but not cold.

Next up were a few water slides!! We slid down rock that was so smooth because of all the running water. Some slides were short, but some were longer or had a bit of a turn, which means you really got to speed up on the slide, and it would spit you out into the swimming hole pretty fast! 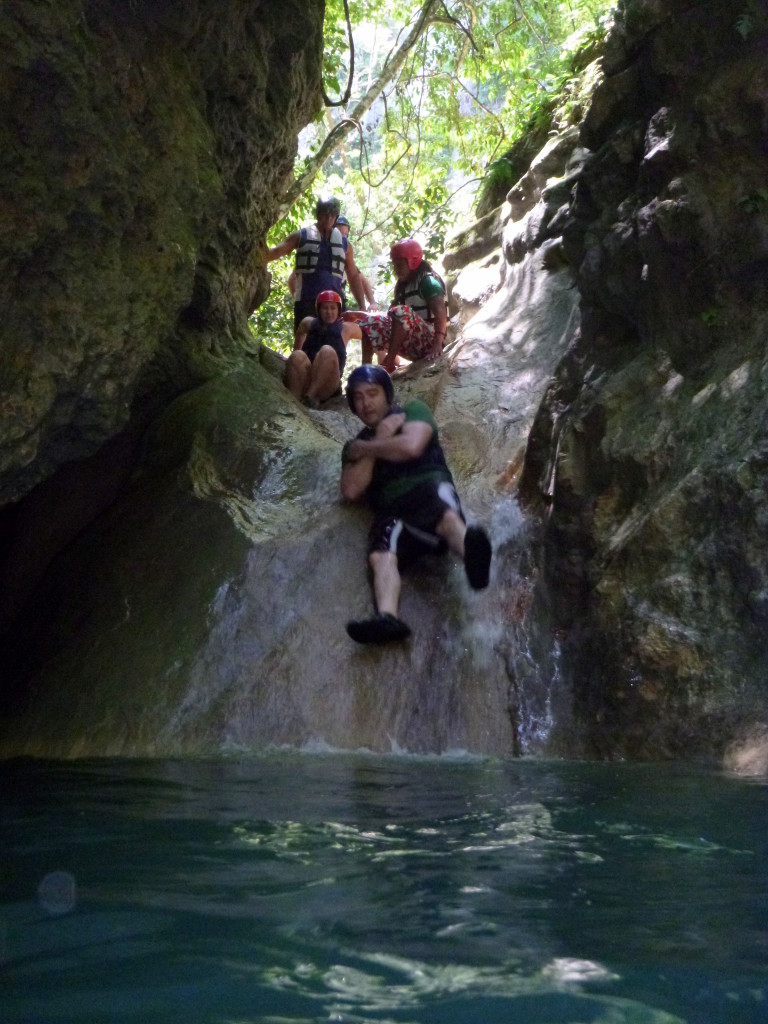 For the next hour or so we alternated between jumping, sliding, and stepping down into water holes. There was some swimming, some hiking, some scrambling. It was AWESOME! 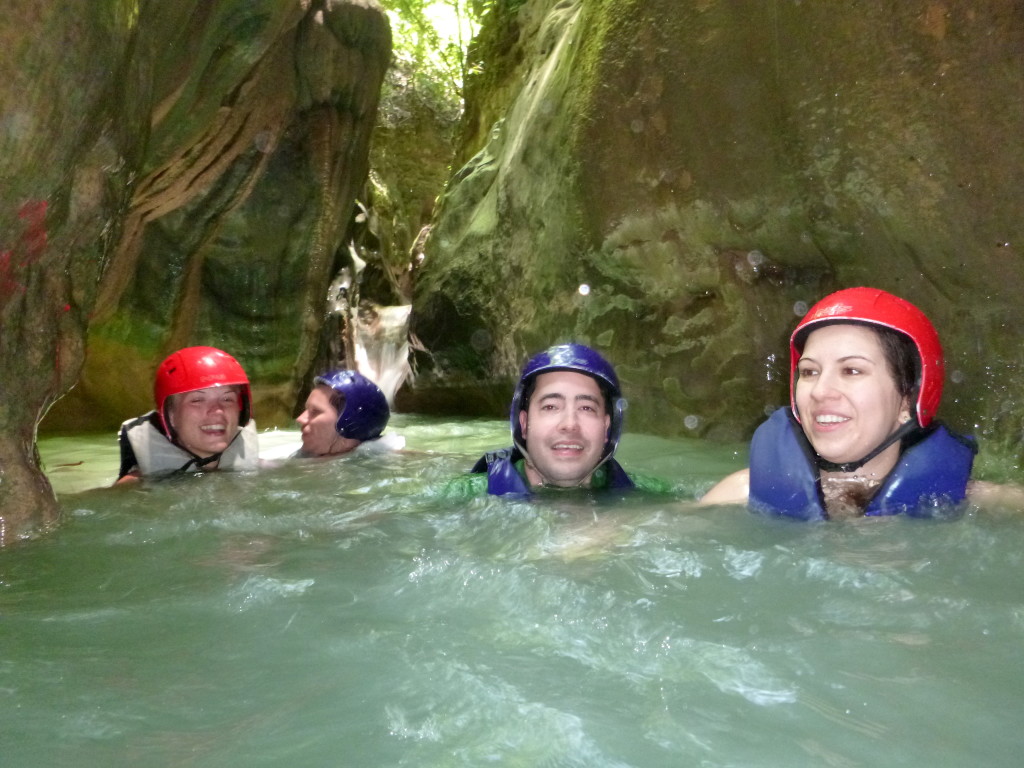 And then we got to the very last jump!! It was so high up – over 20 feet for sure. Luckily, there was a way to skip it and walk around. I chickened out and walked around. Actually, chickened out isn’t even the right term. Chickened out implies that I considered it and decided against it. I didn’t even consider jumping. I saw the jump and just said “oh hell no!” and kept on walking. Aldo and the German couple jumped. Oh well, I was never that brave.

After we got back, I saw that there were showers in the bathroom, so I rinsed off, changed, and we had a beer and the lunch buffet that was getting set up right as we were done with our tour.

It was such a fun time!! And it was awesome that the whole thing is so cheap! It was only around $10/person for foreigners and $5/person for Dominicans. There’s no way you’d get a tour with 2 guides for that price in the US. That said, it was a little confusing in the ticket-buying area. There was no real order to who went up next, there was a guy who scribbled down the number of people in a notebook to keep track of visitors, and nothing really looked official. They didn’t have any waivers to sign or any warnings or information about the fact that this is a challenging hike, that you have to be a good swimmer, and that you could really hurt yourself if you slip off a rock. This was surprising to me because this is part of the National Park (you wouldn’t know it from the website, heh). Aldo had to keep reminding me that we are in a 3rd world country, and this is about what he expected. 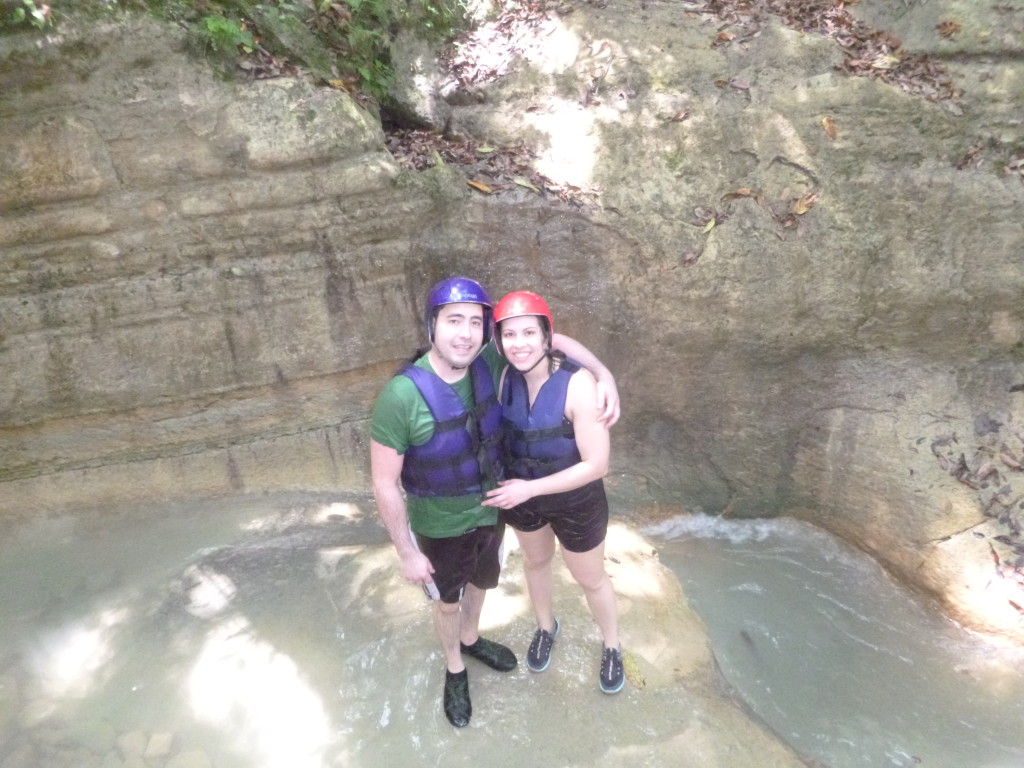 We had such a good time. The only caution I have is that you will be wet and walking for over an hour, so you really need shoes and clothes that won’t rub or chafe anywhere. I had these awesome water shoes. Aldo had regular water shoes from Walmart or Target or something. Both were fine. But I don’t think I would have made it in sneakers or sandals that weren’t made for water.

After the 27 Charcos, we headed over to the teleférico in Puerto Plata for some awesome views from the top.